Here is a list of Top 15 Fonts Used by Professional UI Designers. Learn how to install these UI/UX Fonts in your Blogger theme to make more readable.

It is very tough to recognize the value of your blog's user experience. Maybe your blog is full of interesting content but has some unknown issues. And your readers are skipping your blog without reading the whole content. As a result, the bounce rate is increasing every day.

This problem may arise from the readability issue. In simple terms, "readability" refers to how convenient or fun it is to read something in your blog.

The readability of your blog will determine whether or not you attract followers, readers, clients, and more content shares.

Fonts are undeniably one of the most significant facets of user interface design. A user interface's performance or loss relies on it. You may drop your users right away if they are unable to read your content.

That's why, even though you just have a basic knowledge of typography, you should figure out the fonts are better for a website on your own. 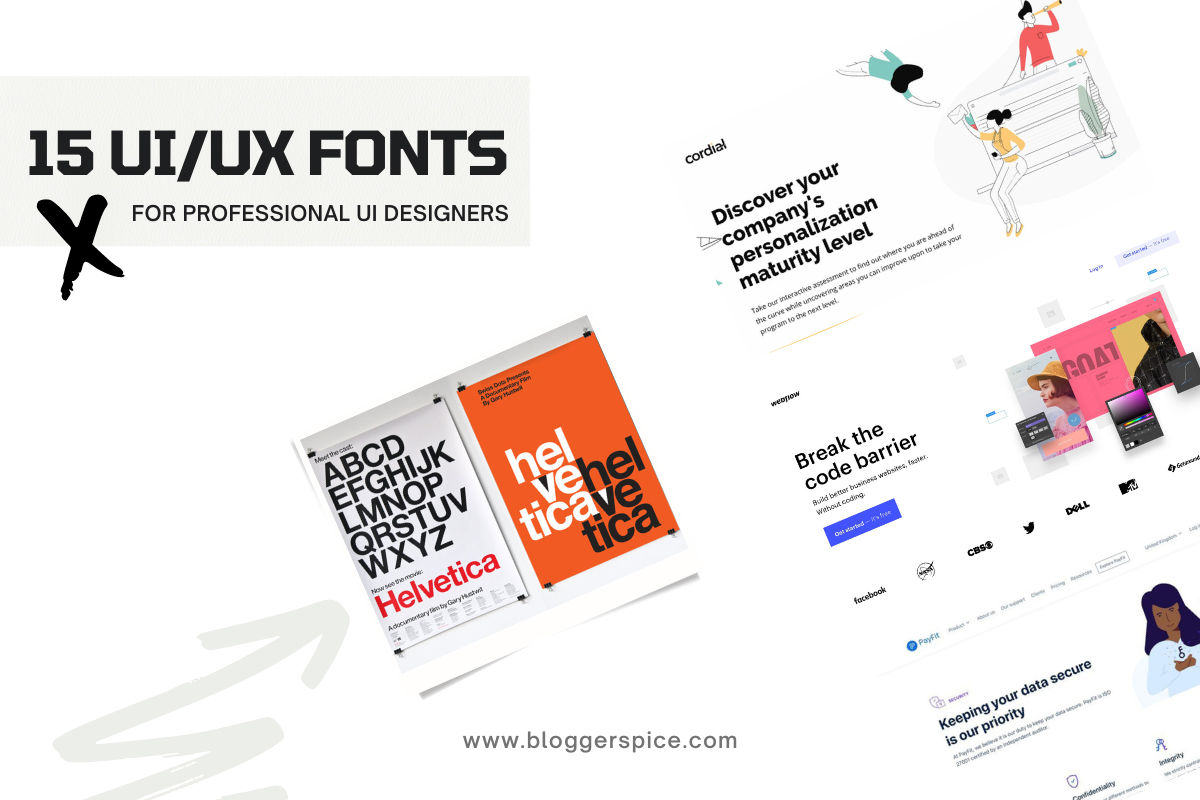 What is the User Interface (UI) Typography?

It is a visual representation of text with a range of typefaces, weights, dimensions, scales, colours, and styles. When you visit a webpage then you can see different types of fonts in a vibrant style.

Regardless of the fact that the user interface (UI) design is a more proven and well-known field. But the debate persists on "What is user interface design?".

The UI design refers to the look, appearance and interactivity of a product are all aspects of user interface design.

“UI is the saddle, the stirrups, and the reins. UX is the feeling you get being able to ride the horse.”
— Dain Miller, Web Developer

It entails carefully analyzing any visual and interactive feature the user can come across. As to typography and colour schemes, spacing, Icons, buttons, illustration, and responsive design are all things that a UI designer considers.

What Should be Considered for Selecting a Font?

We have a huge choice of fonts but need to select 2 or 3 fonts for our website. In this case, these questions should help you discern a decent font from a poor one when choosing fonts for your website or Blog:
When a font comes in a variety of weights, has a broad x-height, and scales well, it's likely to perform well in most UI formats. So before choosing the right one you need to consider those question answers.

The fonts that will be distributed are mainly free and will be used on any website or blog and in smartphone apps. The majority of the fonts mentioned below are also available on Google Fonts, making them much easier to use. However, we have listed some most popular paid fonts.
Free Fonts
Paid Fonts

This is the official Google font for Android, Google's smartphone operating system. This font has become very prominent among designers as a replacement of Arial and Open Sans due to its popularity.

Roboto is a font with two identities. Which has a mechanical skeleton and is mostly geometric in shape.

The font has friendly and inclusive curves at the same time. Roboto doesn't sacrifice, allowing letters to be settled into their typical width, unlike certain grotesques who bend letterforms to impose a rigid rhythm. This creates a more smooth reading rhythm, which is more popular in serif and universalist fonts.

This font is often used as a title or headline because it stands out and grabs attention. It also gives the designs a timeless and sophisticated feel.

The Playfair font architecture has a transitional style. In the late 18th century during the European Enlightenment, broad nib quills were replaced by pointed steel pens as the common writing instrument of the day.

Playfair font is the digital form of that old writing instrument. With the advancements in printing technology, pigment, and paper production, this font became possible to print high-contrast letterforms with fragile hairlines that were becoming gradually dissociated from the printed letterforms.

It's a popular font in e-commerce and fashion app designs because it's a little thick but crammed with casual typography.

But it's not really as clean as Nutino Sans, a few customizations in each letter will make your UI more appealing.

Their clients are tech giants like Apple, Google, Sony and many other international brands. It has 18 styles to use as display or body font. The best pairings of this font with Open Sans, Source Sans Pro, Roboto Slab and Lato font.

This font has a very sleek shape, and it would look much cleaner if the letter spacing is enlarged.
Nunito is a well-balanced sans serif typeface family that comes in two variations:

Nunito: This is a rounded radial sans serif for display typography designed by Vernon Adams. He has taken the initial step for the project.

Nunito Sans: Jacques Le Bailly improved it to include a complete range of weights as well as Nunito Sans, a standard non-rounded terminal variant.

This font is almost remarkably similar to Roboto, with only minor differences in some characters.

It is typically used for web design, while most UI designers prefer Roboto for mobile apps, particularly for the Android operating system.

Lato is a font designed by ukasz Dziedzic. He is a graphic designer from Poland. Lato means "Summer" in Polish. Originally designed for business use, this font is now available for free to all.

Its friendly feel makes it ideal for use as a paragraph font; DM Serif, Merriweather, and Lustria are the best combinations for this font.

Noto improves the aesthetics of the webpage on all sites and in all languages. Noto contains over 30 scripts and will fully support all of Unicode. This same Sans family includes Latin, Greek, and Cyrillic characters.

It is implied and appears in Regular, Bold, Italic, and Bold Italic types. It is a descendant of Droid, and it, like Droid, has a serif sibling family named Noto Serif.

The Lexend fonts are designed to enhance the reading experience by reducing visual stress. Created with dyslexia and reluctant readers in mind. Bonnie Shaver-Troup is the Lexend project's founder, later he realized that these fonts are also useful for everyone else.

The first collection of Thomas Jockin's Lexend fonts (Deca, Exa, Giga, Mega, Peta, Tera, Zetta) all have a 'Medium' weight, and each gets wider and more freely spaced as the weight increases.

It's a show faced with old style and liner numerals, regular and arbitrary Unicode characters, a reasonably detailed set of diacritics, and a stylistic alternate influenced by even more geometric sans-serif typefaces than the default neo-grotesque has driven character set.
Get Raleway Font

Steve Matteson crafted Arimo as a sleek, vibrant sans serif that is metrically aligned with Arial.

Proxima Nova is an entirely remodelled edition of Proxima Sans 1994. It has a total of 48 OpenType fonts with complete functionality. Proxima Nova is a typeface that falls somewhere between Futura and classic sans faces in terms of style.

Thanks to Stempel and Linotype's marketing campaign for this remarkable font. This typeface was developed at the Haas'sche Schriftgiesserei by Max Miedinger and other project team members. It has become one of the most prominent and influential typefaces in the world.

It's integrated into a variety of printers and operating systems. For the Linotype method, Helvetica's initial letterforms had to be adjusted. Helvetica was extended over time to incorporate a number of weights, but they were not aligned with one another.

Price: Euro 45 per style and Total package price are Euro 399. But prices may change over time.

Gotham is the strangest of designs: a brand-new typeface that looks and sounds eerily familiar. Gotham adopted an authentic style from the lettering that inspired it. It is persuasive but never intimidating, pleasant but never bluesy, optimistic but never standoffish.

The incorporation of too many novels features that have never been used before. The lowercase, italics, a wide variety of weights and widths, and a character collection that goes beyond the Latin alphabet. It elevates the plainspokenness of these types and introduces a vast range of articulate identities to the Gotham family.

The price is a bit expensive and starts at $169 per Pack. However, the prices may change over time

Designing a website is cumbersome and appropriate font selection is more complex. Before web design, you can test custom and Google Fonts in your designs in Justinmind's mockup tool. 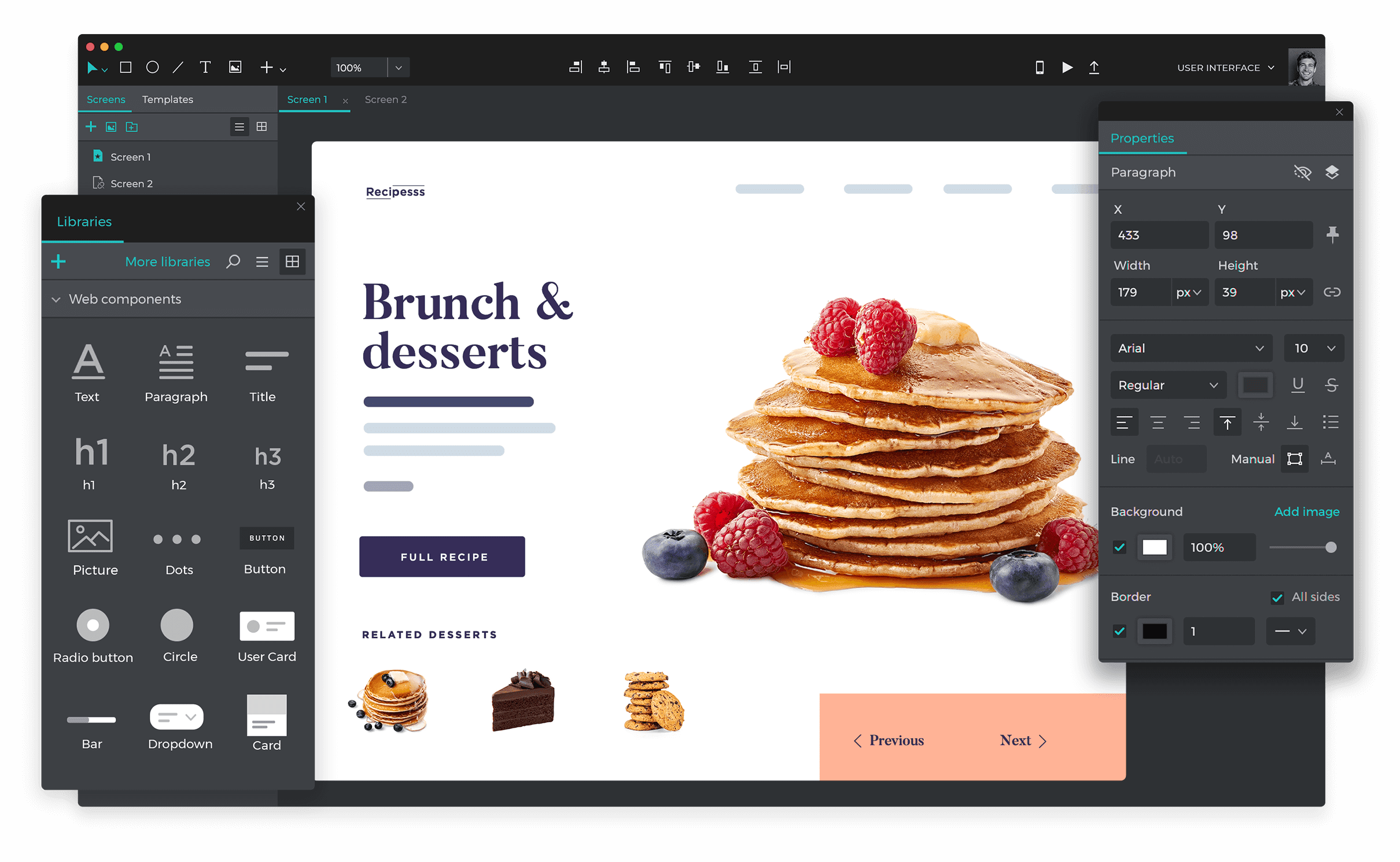 They're simple to incorporate into the prototyping program. If you're torn between a few font alternatives, prototyping and checking before you find the right one is a perfect way to tackle this common dilemma.
Prototyping fonts will help you get on the right track before making any choices that could affect the UX architecture in the future.

To improve your blog’s readability you must use any font from above. However, you can easily all free font, because those are hosted in the Google fonts directory. To use those fonts please follow the below steps:
Step 1: Visit Google Fonts Directory
Step 2: Now select your preferred UI font, as well as select the styles.
Step 3: Now get the font URL. You can get the font in 3 forms.
<link>
<link rel="preconnect" href="https://fonts.gstatic.com"><link href="https://fonts.googleapis.com/css2?family=Playfair+Display:wght@400;700&display=swap" rel="stylesheet">
@import <style> @import url('https://fonts.googleapis.com/css2?family=Playfair+Display:wght@400;700&display=swap'); </style>
@font-face
You can place the font code like below @font-face to use the font in your Blogger theme
Step 4: Now Long in into your Blogger theme
Step 5: and from the left menu select Theme and Edit HTML
Now place the Font code before closing </head>
Step 6: To use the font you have to specify font families by CSS rules.
First, you have to define the font family. That means which one would be the main font of your theme. e.g.
font-family: 'Playfair Display', serif;
Here 'Playfair Display' we defined this would be the main font.
For setting the Post body Heading font you can use like below:
To set the body font

You can easily polish the font by using the CSS trick. And any font can give a different look by customization.
In the above example, you can see the CSS code to change the font. Here you can easily change the appearance by altering the font family name, size, height, letter spacing.
This is just like playing the game with fonts. And you can adjust according to your own tastes.

Whichever fonts you want to use in your Blog, you should limit yourself to use one or two fonts at a time. Using a single font with a range of weights may also be almost as effective as using several fonts.